Steven Odzer started making his mark in the distribution industry 30 years ago. Although he is now the CEO of YBT Industries of Henderson, NV, he started small. “I started my first company at age 18 out of my parents’ basement,” he says proudly. His humble beginnings make him even more grateful for all of the success he has achieved. 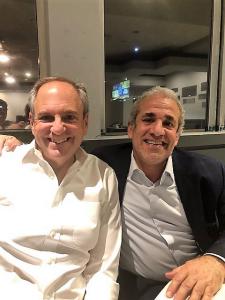 Like all young entrepreneurs, Steven Odzer had to get creative with his first business. He began by selling paper cups, napkins, and plates, which he sold door to door in his neighborhood of Flatbush, Brooklyn. He managed all of his inventory out of his parent’s basement. Steven Odzer attended Yeshiva of Flatbush High School and moved to the Brooklyn College Scholars program. After his door to door business took off, he started selling supplies to food chain restaurants, and over time his clients transitioned to hospitals and nursing homes.

On December 15, 2019, at the Ahavas Torah Center’s celebration of 8 Years of Torah and Community Growth Gala, they presented Seymour Odzer with a lifetime achievement award for his work in the Jewish community. Although the family would have liked for Seymour Odzer to have accepted this award in person, Steven was honored to receive it on behalf of his late father.

Steven Odzer also announced the launch of the Stephen Odzer Scholarship program, which would give 20 scholarships valued at $1,000 each. This scholarship is sure to help those who are seeking to reach their full potential.

Interesting Facts About the Life of Steven Odzer