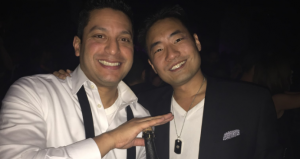 Philanthropist and businessman Abraham Kiswani looks forward to setting a record total as this year’s contributions get off to an unprecedented start.

Well known and highly respected for his philanthropic nature and wider charitable efforts, security industry professional Abraham Kiswani and his business look set to reach a record donation and fundraising total in 2019 as the year gets off to a fantastic start. Here, Chicago-based Kiswani reveals more about his support for charities including the Make-A-Wish Foundation, Toys for Tots, and the Tuskegee NEXT project, as well as his commitment to other local good causes and initiatives.

Having raised many tens of thousands of dollars for charities and organizations including Toys for Tots, the Tuskegee NEXT project, St. Baldrick’s, the Make-A-Wish Foundation, and St. Jude Children’s Research Hospital in recent years, philanthropist Abraham Kiswani looks set to reach a record-breaking new total this year after donating more than $200,000 in 2018.

“Through fundraising, events, and donations made by myself and my company, we’re looking to top last year’s total in 2019,” reveals Kiswani, who has already pledged significant sums of money to several of his preferred charities, nonprofit organizations, and other good causes this year. He currently estimates that this year’s total could top $225,000.

Last month, Abraham Kiswani also announced details of the upcoming First Annual Beat Cancer Charity Basketball Showdown to be held in Chicago. Set to take place on Saturday, June 22, 2019, and billed as ‘one of the best basketball showdowns the area has ever witnessed,’ all proceeds from the event will be donated to St. Jude Children’s Research Hospital.

One of Kiswani’s most eagerly supported causes, the research hospital is closely tied to childhood cancer charity the St. Baldrick’s Foundation, with which the businessman and philanthropist is also heavily involved.

Indeed, he and his company have donated annually to the charitable organization since 2012. Donations made by Kiswani and his firm solely to St. Baldrick’s now exceed $35,000, he reveals. “Much like all of the good causes which I proudly support, St. Baldrick’s is an incredible organization,” he explains, “and entirely worthy of all the help and support that we can give.”

A passionate sportsman, this year, Kiswani is also organizing a number of Major League Baseball tickets to generously gift to local disadvantaged children and those from low-income families. “We’ll also continue to donate to Chicago’s South Side churches to help feed the hungry and to further put back into the local community,” adds the certified security sector professional, businessman, and philanthropist, wrapping up.

A graduate of Alan B. Shepard High School in Palos Heights, Illinois, Abraham Kiswani is today based in nearby Burbank, around 15 miles southwest of Chicago. Outside of his work and charitable efforts, Kiswani’s personal interests include skydiving, bungee jumping, and antique muscle cars, as well as cooking, movie memorabilia collecting, sailing, scuba diving, and softball.