Bryan Paarmann has devoted much of his life to serving and protecting his community and country. Following in his father’s footsteps, he graduated from West Point in 1988 and commenced an over 30-year career in public service before honorably retiring from the FBI in 2019. Although he’s retired, he has not stopped his efforts to serve the public.

Bryan Paarmann frequently provides informational and educational presentations to various groups around the country. His engagements include presentations for law enforcement, military, civic organizations, trade groups, non-government organizations, colleges, and others. He discusses what he knows best: the changing dynamic of terrorism and what can and should be done to mitigate the threat. 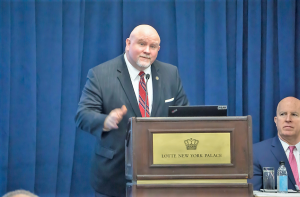 Bryan Paarmann graduated from the United States Military Academy and served as an Infantry Officer in the US Army. During his tenure, he completed both peacetime and combat assignments around the globe. He then proceeded to pursue a career in the Federal Bureau of Investigation (FBI), following his father’s legacy. Bryan Paarmann’s father had served in the FBI from 1953 to 1980 after serving in the military in World War II.

Bryan Paarmann moved up the ranks in the FBI and completed both operational and leadership assignments with increasing scope and responsibility within both the Criminal and National Security mandates of the organization.

For much of his career, he specialized in counterterrorism and crisis management. However, he was also one of the senior leaders in the FBI’s International Program. In this capacity, he oversaw the totality of the FBI’s efforts overseas to build, develop, and maintain strong collaborative relationships with the world’s law enforcement and security organizations in order to further American foreign policy objectives and bring a cohesive network to bear on crime problems and terrorism worldwide.

One of his greatest honors was his appointment to lead the NY Joint Terrorism Task Force. He became Special Agent in Charge at the New York Office Counterterrorism Division and the NY JTTF in 2017. The NY Joint Terrorism Task Force is one of the most dynamic and oldest of the 102 JTTFs in the United States. He retired honorably from the FBI in 2019.

After over 30 years of serving his country in various positions, Bryan Paarman has amassed a wealth of security wisdom and operational law enforcement knowledge. Although he has more than done his part to selflessly serve his nation and people, he is committed to a lifetime of service. While he has transitioned away from government services and into the private sector, he endeavors to continue to keep his country and its citizens safe through education, training, and innovative security practices.

5 Healthy Carbs to Eat Instead of Refined Grains & Sugar, According to Chad Tackett