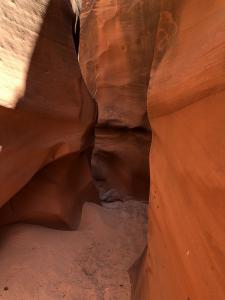 Carl Shane Kistel takes advantage of the many outdoor activities his state offers, such as rock climbing, fishing, and camping. An experienced trial hiker, he frequently gives guided tours through the state’s rocky terrain including in slot canyons, which prove to be a greater challenge than most trails.

Carl Shane Kistel has spent most of his spare time since childhood outdoors enjoying nature and taking in all that the Utah wild has to offer. A regular hiker and camper, he’s at home in many of the most rugged terrains and has navigated the state’s trickiest trails. It’s this passion for exploring the outdoors that led Carl Shane Kistel to begin giving guided hiking tours.

“There’s so much out here to see and enjoy that most people wouldn’t stop and take the time to notice on their own,” says Carl Shane Kistel. “In these guided tours, I can answer questions and point out the hidden elements of nature that go unnoticed from the outside.”

He’s traveled along beginner trails and advanced routes on his own and while leading guided tours. One of his most challenging hikes––both alone and in a group––is through the native slot canyons, which are much narrower and treacherous than other trails.

Slot canyons differ from other hiking trails because of their vertical walls and narrow paths that usually allow hikers to touch both canyon walls at once. It’s not uncommon for certain points of a canyon hike to force the hiker to turn sideways for them to fit as they move along.

“It can be very claustrophobic in these canyons and so I make sure all the guests on my guided hikes are fully prepared for what they’ll face,” says Carl Shane Kistel. “While the spaces are extremely tight at times, I tell them that it’s a great way to confront your fears and get an adrenaline rush at the same time.” 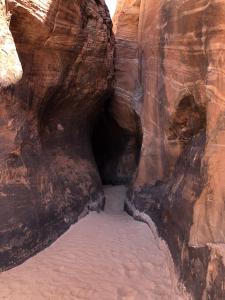 While slot canyons are incredibly tight to walk through, they don’t come with any real threats until the rain arrives. If there is a potential for thunderstorms, tour leaders like Carl Shane Kistel usually postpone hikes until a sunnier hour or a different day entirely.

Rainfall around a slot canyon is capable of moving rocks and boulders around the top into the hiking trail. It’s also very dangerous to be in a slot canyon during the rain as it is more susceptible to flash floods and rising waters, which can prove to be lethal if not handled with extreme care.

In those instances, Carl Shane Kistel suggests moving on to other, less risky paths such as waterfall and river trails until the weather clears up.

“Hiking down slot canyons can prove to be a real challenge to some people and hazardous if not respected,” says Carl Shane Kistel.

“But if the weather permits, and if the timing is right, they can be the most intimate, exhilarating, and beautiful trails in the whole country.”