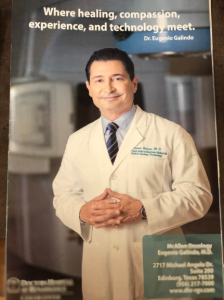 Unveiled to over 375 patients and their families earlier this year, McAllen Oncology’s all-new cancer center in McAllen, Texas, was opened to great fanfare in mid-January. A veteran of the field for more than 30 years, McAllen Oncology’s Dr. Eugenio Galindo looks back on the highly successful event, staged in association with the city’s Chamber of Commerce.

“January saw myself and the team at McAllen Oncology kick off 2019 in great style,” explains Dr. Galindo, “opening our revolutionary all-new cancer center to former and current patients, their families, and a number of prominent figures from the city.”

With close to 400 patients and their families in attendance, the January 11th event went off without a hitch. “It really was an amazing day,” adds Dr. Galindo of the grand opening celebration. “At McAllen Oncology,” he goes on, “we offer complete cancer care in a state-of-the-art facility which includes an innovative community infusion center with private suites and a diagnostic imaging center and laboratory.”

According to Dr. Galindo, McAllen Oncology is the only cancer center of its kind, not just in McAllen, but across all of South Texas. “Our ribbon cutting was a great way to start the new year,” says the oncology specialist of the event, which was held alongside a number of other ribbon cutting, ground-breaking, and further official celebrations and events arranged in association with the McAllen Chamber of Commerce during the month of January.

Boasting a membership of more than 2,000, the McAllen Chamber of Commerce was first established in the mid-1920s as an evolution of what was then known as the ‘McAllen Businessmen’s Club,’ which, 13 years prior, and founded in 1911, drove much of the initial creation of the city of McAllen which residents know and love today.

“The largest chamber in a 15 county area, I’m proud to say,” Dr. Eugenio Galindo adds, wrapping up, “that the city’s Chamber of Commerce is widely regarded as the most innovative, cutting edge, and progressive chamber in the region, which is great news for us here in McAllen.”

Dr. Eugenio Galindo is an experienced physician specializing in oncology, certified through the American Board of Internal Medicine. Dr. Galindo has served in the Rio Grande Valley area for almost three decades and is an active participant in bringing the latest in cancer treatment and screening to the southernmost tip of South Texas. Fluent in English and Spanish, Dr. Galindo has also authored several influential medical publications on the subject of oncology.

For the latest from McAllen Oncology, please head to https://www.facebook.com/McAllenOncology/.

Kelly Hyman Offers a Brief History of the Democratic Party