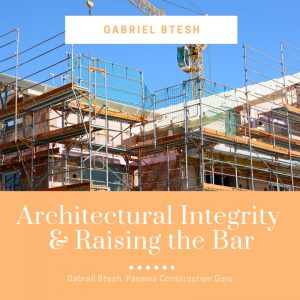 Following over 30 years in the industry and now has taken over the successful family business founded by his father, construction and property development specialist Gabriel Btesh has, throughout his career, show a demonstrable contribution toward revolutionizing standards of architectural integrity throughout the Republic of Panama.

Over the course of the last three decades, Btesh and his family’s company’s extensive team of workers have, he says, succeeded in raising the bar for architectural integrity, both in Panama City and across the country. “During this time, we’ve overseen countless residential, retail, leisure, and entertainment industry projects throughout Panama,” Btesh explains.

“Originally founded by my father, Jack Btesh, our business has succeeded in revolutionizing building standards as part of a conscious and concerted effort to commit to well-being and quality of life in the country,” he adds. This commitment is particularly evident, according to Btesh, in the company’s residential construction projects.

Offering one such case in point, the Panama native explains how the business was commissioned to design and build a series of revolutionary apartment complexes in the country’s capital. “We were commissioned to construct a series of cutting-edge apartment buildings, designed for local families,” he reveals. “These apartments were designed to offer affordable, comfortable, safe living, and saw us employ only the very latest, very highest standards of architectural integrity as we do on each and every one of our builds,” Btesh adds.

Despite the affordable nature of the project, Btesh explains that he sourced only modern, high-quality materials, successfully structuring what ended up being truly luxurious-feeling living spaces in a cost-effective manner.

Furthermore, from shopping malls to five-star hotels and venues including Santa Maria Golf & Country Club, Btesh’s commitment to architectural integrity applies across the board, he says.

Also fervently committed to increased levels of well-being, Gabriel Btesh is further recognized for adding amenities such as social areas, gyms, and creative spaces to many of his residential builds. Btesh also estimates that during the last 10 years alone, he and his business have successfully created upwards of 10,000 construction sector jobs, as well as thousands more created indirectly as a result of the firm’s retail, leisure, and entertainment industry projects.

“Creating abundant employment opportunities, raising the bar for architectural integrity, and helping to improve wider building standards across Panama are, perhaps, among my proudest professional achievements,” he adds, wrapping up, “and all things which I quietly reflect upon daily.”

3 Things to Know Before Starting A Blog with Dr. Scott Zack

Douglas Greenberg reflects on passion for travel and outdoor activities