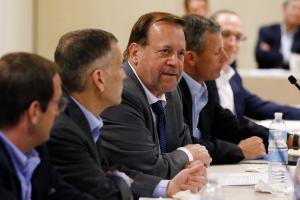 The Institution for Electric Innovation (IEI) recently held a meeting in Philadelphia, PA, where they invited top executives and leadership from technology and power companies to participate in their annual roundtable.

Institution for Electric Innovation’s members represents 70% of the U.S. electric and power sector. Gerry Cauley, Principal Consultant in the Pace Global – Energy Business Advisory group within Siemens, was pleased to be in attendance for this roundtable discussion.

Among the agenda was the discussion of digitalization. Gerry Cauley’s company played a leading role developing underground distribution network automation for a Northeast utility to minimize the impacts of severe storms like Hurricane Sandy and to speed customer restoration. The distribution feeder automation system would keep power going even during and after a severe system event.

Gerry Cauley stated, “As a country, we are facing challenges with aging infrastructure, extreme weather conditions and failures to meet customer and system needs both during and after outages take place. This roundtable hosted by IEI offered us a chance to further explain our plans and to brainstorm with other top leaders in the U.S. on ways to execute improvements to resilience and customer service.”

Gerry went on to explain further, “With Seimen’s EnergyIP Meter Data Software, information can be forwarded to the energy market in real-time, allowing integration of renewable energy sources to be utilized efficiently and without delay. Outages can be localized and alleviated rapidly with our low voltage outage management system.”

Gerry Cauley’s position is focused on the integration of emerging technologies, including renewables, distributed energy resources, and digital technologies. He advises energy companies on the mitigation of extreme risk events, resilience, and cybersecurity. He also provides expertise on emerging regulatory and compliance issues.

Prior to joining Siemens, Mr. Cauley served in Guyana, South America, as part of a consulting group from Manitoba Hydro International, advising the CEO and executive team of the national utility, Guyana Power and Light. Mr. Cauley focused on upgrades to the system control center, distribution feeder outage performance improvements, plans to integrate utility-scale solar facilities and resource expansion through the negotiation of power purchase agreements.
He facilitated a C-level steering group coordinating cyber and physical security, resilience, and national emergency response between utility CEOs and senior government officials at the Departments of Energy and Homeland Security and the White House.

Protect My College Student: 2 AM Head Cold, Who do you Call When at College?