Active service members might not strike you as bibliophiles or avid readers, but in fact many military men and women can trace their interest in serving their country back to an influential book they stumbled across as a child or teenager. And, truth be told, during the long, hot, dusty days of a desert deployment, there are only so many games of pool one can play according to Maxwell Sweeney. So plenty of enlisted men are prone to picking up a book just to pass the time. And unlike a pool cue, it’s easy to tuck a paperback into your pocket or toss it into a duffel bag — pretty important considerations for a community of people who are accustomed to traveling light, as well as being shipped out with only a moment’s notice. 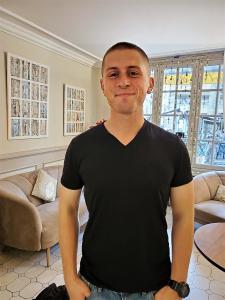 Military aficionado Maxwell Sweeney credits his lifelong interest in tactical operations and combat philosophy in part to his childhood reading habits. As he learned more about military tactics and weaponry, his reading list grew; that, in turn, helped him to gain a well-rounded and in-depth perspective on what it means to fight for one’s principles and country.

Now, Maxwell Sweeney is sharing his list of essential military-themed reads with you. So grab a cup of coffee while you check out his suggestions, then get ready to hit up your local library — or your Amazon account!

The Art of War by Sun Tzu

It’s hard to imagine that a text dating back to the 5th century BC could remain relevant today, in the era of global positioning systems, surface-to-air missiles, advanced chemical warfare, and bona fide rocket science. But that’s exactly the feat that The Art of War, one of the best-known tomes on the topic of war, has achieved.

The teachings of Sun Tzu, widely considered as one of history’s foremost strategic thinkers, were first introduced to America’s reading public in 1910, when the first English translation was published. Since that time, The Art of War has gone on to influence not only countless individual military leaders and their troops, including service members just like Maxwell Sweeney, but also politicians and business pundits — essentially, anyone who is interested in the psychology behind management, motivation, conflict, and critical thinking.

The Prince by Niccolo Machiavelli

The next book on Maxwell Sweeney’s military must-reads is another centuries-old work, The Prince by Niccolo Machiavelli. This book dates back to at least 1535 and gave birth to the moniker “Machiavellian” to describe someone who is conniving, scheming, and unscrupulous. That’s an extension of the idea that military leaders, politicians, or really anyone who is in, or who wants to be in a position of power, can justifiably take any action, no matter how immoral, in his pursuit of certain goals.

Few modern-day leaders or public figures would admit to using “the ends justify the means” as a credo or motto to live by. Nevertheless, The Prince, much like The Art of War, is an invaluable book for those who wish to understand the philosophical reasoning behind mankind’s motives, especially when it comes to large-scale economic or political gains.

The Hunt for Red October by Tom Clancy

Fast-forward to 1984, the tail end of the Cold War — a decades-long conflict between the U.S. and the Soviet Union that was characterized by the constant, imminent threat of nuclear war. Writer Tom Clancy, who would go on to publish dozens of thrillers and non-fiction titles, including the popular Jack Ryan series, could not have timed the publication of this novel better. The early 80s were marked by tension between the two superpowers, and The Hunt for Red October tapped into that zeitgeist. It didn’t hurt that then-president Ronald Reagan endorsed Clancy’s work by talking about how much he enjoyed the book.

The Hunt for Red October is a remarkable behind-the-scenes peek at the technological aspects of military life, espionage, and warfare. It was so rich in detail and rang so true to readers, that many assumed Clancy had somehow acquired access to top-secret military documents, or at the very least was fictionalizing a true story. Not only were those assumptions false, but Clancy — whose name is today synonymous with military thrillers — never even served in the military himself. Like Maxwell Sweeney, he was just a true patriot and a military buff.

John Zimmel Lists Three Ways to Get Paid on YouTube

Scott Hirsch, Marty Hogan Give Back to Salvation Army Thru Legends Tournament