Niclas “Nick” Herle, founder and CEO of Heli Aviation Florida, LLC, Heli Aviation Holding, LLC, Heli Aviation Holding II, LLC, Diamond Helicopters, LLC, and AeroParts.com, LLC, is a German-American entrepreneur and innovator. He believes strongly that every person can make a difference in the world and seeks to do so himself by helping and inspiring others. In particular, Nick Herle loves teaching kids about helicopters as aviation provides an apt avenue for kids to “think outside the confines of everyday life.”

Nick Herle frequently participates in and school, community, and youth-centered events in Florida and elsewhere. He hopes to encourage kids to pursue their passion, use their imagination, and dream big. He also aims to teach kids about aviation specifically, exposing them to the vast promise and potential of the industry today and in the future. 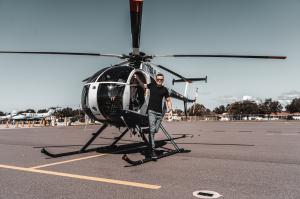 Born in Germany, Nick Herle spent his childhood in Baden-Baden in the Black Forest in Baden-Wuerttemberg. Even back then, the young innovator saw things from a different perspective than many of his peers. By the time he was a teen, he was already getting started on his professional ventures. He founded Herle Funkservice GmbH in 2005, which provided radio packages for governmental agencies and private entities.

He sold his first company in 2011, by which point he was heavily involved in the German Red Cross, serving as a Battalion Chief for the local crisis response unit. While still working in telecommunications, he started to venture into aviation, recognizing helicopters played a vital role in crisis response. He earned his pilot license at age 17 and quickly decided to relocate to the United States, where more aviation opportunities were available.

With a degree in Business Economics, his pilot’s license, and now years of experience assisting in various missions and enterprises from search and rescue to firefighting and private and business aviation ventures, Nick Herle is the ideal candidate to empower and encourage future generations to take the helm and forge their own path in life.

“Our success is directly related to our clarity and honesty about who we are, who we’re not, where we want to go, and how we’re going to get there,” Nick Herle said on his website. “No matter your life’s purpose, do it because it’s right, not because it’s right for your resume.”

Learn more about Nick Herle via his website: https://nickherle.com/ or connect with him on LinkedIn: https://www.linkedin.com/in/nickherle/

James McEnerney Advises on What to Do with Your 401(k) When You Leave a Company: Part I