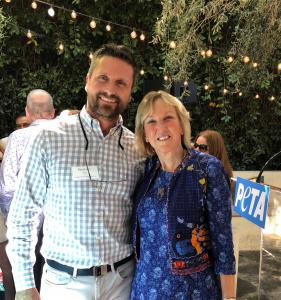 Founder, CEO, and Chief Counsel of LeaseLock, Reichen Kuhl also serves as a Vanguard Society Member and an Augustus Club Member for PETA and was invited to the birthday celebration for the organization’s founder in Venice, CA.

Reichen Kuhl was among other notable guests celebrating Ingrid Newkirk’s birthday at her party on June 30th in Venice, California. In addition to others, Reichen Kuhl attended the gathering alongside Angelica Houston and Bill Maher. The party was to honor PETA’s founder and uphold her triumphant legacy in the battle against animal cruelty.

Held at the Plant Food + Wine of Venice, guests celebrated Ingrid Newkirk’s 70th birthday and her 35 years of liberating animals from abusive environments.

“So many notable people were invited, and it really showcased how large of an impact Ingrid’s work has had on many people,” says Reichen Kuhl. “She’s a beloved person who’s accomplished so much for animal rights. Watching her speak on many occasions and online is what really inspired me to change my lifestyle toward one of full compassion for all animals.

As president and co-founder of PETA, Ingrid Newkirk has led and organized the largest animal rights organization in the world for decades. She’s passionate about all living things and has worked her whole life for the betterment of both people and animals in various capacities.

Early in her life, Ingrid Newkirk volunteered by packing pills and preparing bandages for people who suffered from leprosy, by stuffing toys for orphans, and feeding stray animals. Her mentality has always been to make the world a better place for all creatures and to inspire others to adopt a similar mindset.

In 1970, Ingrid found abandoned kittens left behind by a neighbor and took them to an animal shelter for treatment. There, she became involved in the organization and volunteered to investigate abuse cases, clean kennels, and care for animals in her spare time. As she worked on increasingly more intense cases (such as pigs left to starve on abandoned farms and the cruelty of animals in circus acts) she realized the great need for an organization like PETA that would lead the fight for animal rights.

Since its founding, PETA has become the largest animal rights organization in the world and has assembled millions of members and supporters worldwide. Thanks to people like Ingrid Newkirk, PETA has helped shut down facilities abusing animals, closed the largest horse slaughter operation on the continent, brought the horrific abuse of animals in laboratories to light, and much more. In addition, PETA representatives have helped curb society’s opinion on animals they consider pests and encouraged the end of abuse of domesticated animals.

“The party was just as much for the incredible legacy Ingrid has created as it was for her birthday,” says Reichen Kuhl. “She has become synonymous with the battle against animal cruelty.”

Reichen Kuhl is formerly known as Reichen Lehmkuhl, whereas he and other members of his family shortened their last name to “Kuhl” in 2014.

Financial Advisor, Darcy Bergen Discusses a Social Security Advantage for Those 66 and Older