As a former captain of the United States Air Force, Reichen Kuhl spent years fighting for the safety and well-being of American citizens.

Extending his same values to the protection of animals from cruelty and abuse, he has been inducted as a Vanguard Society Member for PETA. 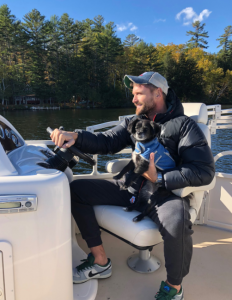 Reichen Kuhl is an American lawyer and businessman who formerly took on work as a model and occasional actor. He served in the Air Force as a captain and today volunteer with nonprofit organizations and other ventures for good in his free time. One of his most notable contributions is to the PETA organization where he has been named a Vanguard Society Member.

“Animals suffer a lot of neglect and abuse at the hands of humans,” says Reichen Kuhl. “It’s a widespread issue with major cases around the world, and by serving as a Vanguard Society Member for PETA, I will be able to help raise more international awareness to prevent it.”

PETA, which stands for ‘People for the Ethical Treatment of Animals’, is often considered the largest and most empowered animal rights organization in the world. Today, support from PETA has grown to over 6.5 million members and volunteers like Reichen Kuhl.

Many times, the focus of PETA is on a few key areas where organizers feel the greatest number of animals suffer the most intensely for the longest. These include animals undergoing testing in laboratories, animals slaughtered for the food industry, those that are used for their coats and pelts, and those in the entertainment industry (such as circus animals). PETA members make it their duty to ensure humans are practicing reasonable care of animals no matter the purpose for their involvement.

PETA is able to make real change through public education, cruelty investigations, research, animal rescue, legislation, special events, celebrity involvement, and protest campaigns. They work on cases that improve living standards for domesticated animals as well as on those concerned with the cruel killing of rodents, birds, and other animals that are often considered a form of pest.

“Many industries use animals as a means to an end without considering their individual experiences,” says Reichen Kuhl. “It’s our duty to bring their cruel practices to light so that we can end this behavior or else find more humane solutions.”

The Vanguard Society members of PETA are at the forefront of a lot of the organization’s successes and serve as leaders in their fight for animal rights. Members are frequently invited to special events (such as quarterly town hall meetings with PETA’s president and senior staff members) and work behind the scenes to improve animal handling around the globe.

Through efforts from Vanguard Society members like Reichen Kuhl, PETA makes strides in the fight for animals to live their lives free from abuse, neglect, and exploitation by humans.

Reichen Kuhl is formerly known as Reichen Lehmkuhl, whereas he and other members of his family shortened their last name to “Kuhl” in 2014.