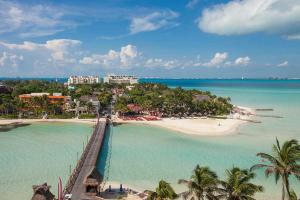 For charity work, Samuel Lehrer of Miami supports various causes in Mexico, especially in Isla Mujeres where he and his family, and specifically his mother is a daily, and longtime supporter of The Little Yellow School House. By helping organize, spread information, and volunteering during the Island Time Fishing Tournament, he secures funding and boosts awareness of the The Little Yellow School House’s nonprofit organization.

For decades, Samuel Lehrer of Miami and his family have improved the efforts of the Little Yellow School House on Isla Mujeres by volunteering and spreading their message of hope and quality education. The nonprofit organization has provided specialized care to the disadvantaged, disabled, and special needs children of the island through skilled teaching, resources, and hands-on care.

The Little Yellow School House is the only education facility of its type on the entire island which offers care, education, and ongoing support to these children and their families. It’s through the help of dedicated volunteers like Samuel Lehrer that keep the organization cost-free to the families of the children enrolled. Since 1993, the nonprofit has grown from a single-room facility to a learning center with six classrooms, multiple full-time teachers, and over 50 students receiving intensive care and education.

“It’s an extremely important organization that provides special needs children and their families hope for the future,” says Samuel Lehrer of Miami. “The school has an excellent success rate of getting special needs children back into regular schooling, and/or improvong their quality of daily life, which is a tremendous help to the kids and their families alike. “Helping others fills the heart”.

By far the largest financial contributor to The Little Yellow School House, the annual Island Time Music Festival and Fishing Tournament on Isla Mujeres raises funds to cover present expenses and help the organization continue growing to meet diverse needs. All artists donate their time and talent as well. The tournament is a labor of love for the supporters and participants.

The competition and festival took place this year in February over a five-day period, beginning with the Captain’s meeting on February 19 where rules were outlined for competitors. February 20-23 were designated fishing days before awards were handed out during the banquet on the evening of February 23. The fishing tournament is an ongoing sailfish release tournament including categories for the heaviest Dorado, Wahoo, Tuna and King Mackerel fish. The $1,500 U.S. fee covers the Captains’ Meeting, Awards banquet, and four music festival tickets for each competitor.

The kick off party took place at the Lehrer’s ocean front home, and set the tone for the entire week. Whether listening to live music, dancing, or just chilling on the beach, all had a great time. “It was the beginning of something super special, in a special place”.

Dozens of musicians performed throughout the weeklong festival and a variety of food and entertainment were offered to the visitors of Isla Mujeres during their stay. The festival featured musical performances from Jerrod Niemann, Runaway June, Maggie Rose, Love & Theft, Cowboy Mouth and many others.

“Many world-class fisherman enter the competition every year where they fish within 50 miles of the island’s coast and enjoy a week of exciting festivities,” says Samuel Lehrer. “And all proceeds are donated to The Little Yellow School House to continually improve their offerings for disadvantaged children and their families.”

Eliseo Delgado Jr. Discusses the Latest Addition to the Iot: The Shadecraft Sunflower